Ahoy Mateys!  For the first time I am going to attempt a piano theme for the year.  Many other teachers center their teaching around a theme for the year to promote excitement and incentives for the year.  After working this year in a Music Camp where I used a pirate theme, I decided to take that theme and run with it.  So the theme for my studio for 2011-12 is

I am already thinking of games and activities around the theme, but the first thing I wanted to do was make an incentive chart for the students using none other than a Treasure Map!  The students are going to collect jewels (inexpensive beads) to spend in the Treasure Chest and they can chart their progress on the map.

Each time the student meets a special symbol on the map (ship, pirate or treasure chest) they are promoted to a new position on the ship.

I am throwing around the idea of collecting a different pirate goodie each time they reach a symbol on the map.  I am either going with pirate silly bands or rubber duckies that look like pirates.  This would be in addition to the jewels they get to spend in the treasure chest.

I haven't worked out all the details, but I think they will need 5 jewels to cross off each dot on the map. Any ideas you guys have are more than appreciated!

Here is a look at the treasure map if you are interested in sailing the high seas with me: 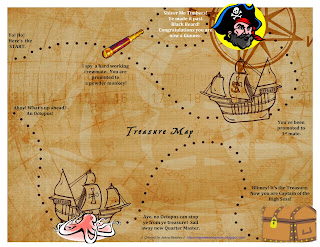 Popular posts from this blog

July 28, 2015
1.  Tried and true:  “I like how Henry is sitting quietly”    2.  Scoreboard:  Tallies for different groups, boys and girls, teacher vs. student, table groups.  I did this all last year and it was not even for a prize.  Kids love competition!    3.  Token economy:  Give the class a cotton ball or marble in a jar for when they are following the rules or getting their work done.    4.  Special Friend:  Have a special animal the student gets to sit with if they do an awesome job.  The special friend will only sit with a quiet friend.    5.  Special Something:  Special sticker, stamp or candy (it works) for those who are following directions.    6.  Selfies:  Take a video or picture (or pretend to).  Tell them you might send this to their parents so they need to be on their best behavior!    7.  Super Spot:  Draw a smiley face or use scented lip balm to make a spot.    8.  Mystery Student:  Pick a random student to watch for good behavior.  Pi
Post a Comment
Read more

January 17, 2012
Incentive cards are a great motivation tool for any activity.  Students love the fun backgrounds and try to fill up their cards with the tokens.  I printed these out front and back on card stock and then laminated them. I use magnetic chips to fill the circles, but you can use bingo chips, pennies, M&M's, etc.. You can use the incentive card to motivate a student to practice.  They must complete a passage with no errors, or with dynamics, or 5 times to get a chip. You can add a fun element and roll a dice to see how many chips you are playing for.  Have fun with the incentive cards. Let me know if you have a request for a favorite character and I will try and make one. Angry Birds Angry Birds 2 Phineas and Ferb Phineas and Ferb 2
1 comment
Read more