I recently saw a post on the Piano Club Forum about a student who was having trouble with finger independence.  When she presses the key down she doesn't release it.  She leaves it down and plays the next finger and then the next, until all fingers are pressed down.   This is a habit some students develop that with some work can be corrected.

First I would work on with the student on finger number recognition with some finger exercise cards, making sure the student has the proper technique.

Then I might get out some finger puppets and have the student go back and forth between fingers, holding the puppets upright.  We may use some funny voices or animal sounds alternating between the fingers.

For example:  I might say "Have the dog talk to the pig. Roof, oink, roof, oink"  The student would bend the 3rd finger and the 2nd finger alternating.  I would have the student do this with the puppet book upright.  The fingers naturally wants to retract, but if the student doesn't retract the finger, I would point out that only one animal can speak at a time.

Then I would have the student place the book on their hand in a playing position, but switch the book around so they can see the puppet faces.  This means the book would be on the student's hand backwards or upside down,  For single finger puppets, just turn the puppets face around.

I would alternate between fingers tapping on a tabletop, making sure the animal lifts back up when the next finger is played.  You can do animal sounds or use the cards above or make up your own exercises.  The animals really help the children see whether they brought the finger back up or not.

Then have the student try the exercise without the puppets on the tabletop and lastly transfer to the keyboard. 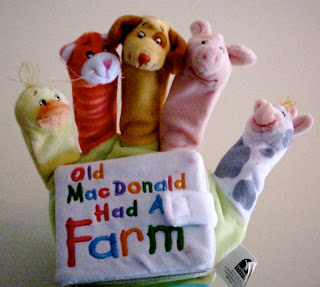 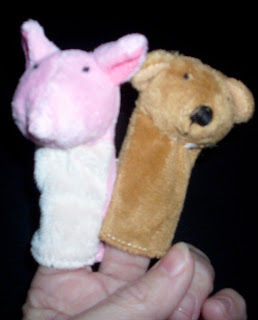 You can find the Old MacDonald Finger Puppet Book at Amazon for $9.35.
I found the other finger puppets at the dollar store (4 for a $1.00)
One post suggested pretending to place chocolate chips in play dough, like making a cookie.  There is a song in Faber's My First Piano Adventure that goes well with this idea.  This would also be a fun activity. 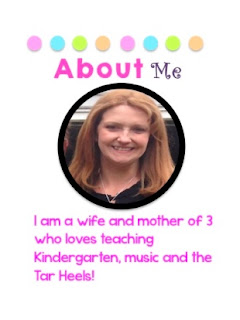